Orion adds plenty of spice in 2009 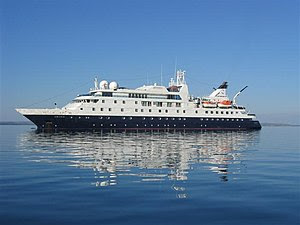 Asia: Brand new for 2009 are Orion's Spice Islands, Gulf of Siam and Vietnam Explorer expeditions to Asia. Depending on the chosen voyage these 9, 10 and 11
night itineraries (September and October 2009) include both popular and rarely visited Asian destinations. Visit a string of beautiful Indonesian islands including Bali plus expeditions to the exotic coasts and islands of Malaysia, Thailand and Vietnam (including an optional side trip to Angkor Wat in Cambodia).

Departing late October 2009 is a 10 night cruise between Bali and Cairns. This Forgotten Islands expedition will feature the island of Komodo, famous for its dragons, Maluku, Yamdena Island and Thursday Island in the Torres Strait before arriving in Cairns.

Sub-Antarctic Islands: Orion's expeditions to the Antarctic have sold out each year with adventurers appreciating the departures from Hobart and Bluff to Commonwealth Bay and the Ross Sea regions and the chance to visit the historic explorer's bases of Scott, Shackleton and Mawson.

The Sub-Antarctic Islands component of these voyages is so popular that in 2009 dedicated Sub-Antarctic Wildlife Adventure expeditions are planned focussing on the extraordinary wildlife found on the wilderness islands of World Heritage Macquarie, Campbell, Auckland and Snares Islands and spectacular New Zealand fjordlands. Spectacular scenery combined with abundant bird and marine life creates island adventures in a photographer's paradise for those not wishing to journey to Orion's Antarctica.

The Kimberley voyages: 10 voyages between May and September 2009 feature the dramatic highlights of the iconic Kimberley coast including the ever-popular Opera Under The Stars voyage (a one-off voyage on the 21st August 2009 that includes a night at the Opera in Broome as a guest of Orion) and a Guide to the Southern Skies voyage. This 11 night voyage from Darwin to Broome will have a special astronomical focus when Professors Fred

Watson, astronomer in charge of the Anglo Australian observatory at Coonabarabran, and David Malin, astronomical photographer, writer and lecturer, reveal the ancient legends and modern science of the universe to Orion's guests.

Arnhem Land: Orion's expeditions in 2006 and 2007 really sparked interest in the indigenous art world and so a further 7 night Art of Arnhem Land voyage, departing Thursday Island for Darwin, will be undertaken in April 2009 exploring the isolated art communities of Arnhem Land. Hosted by pre-eminent authorities on indigenous art this is the perfect voyage for art collectors and enthusiasts alike

Norfolk Island and Melanesia: In February 2009 Orion will undertake a 19 night Norfolk and Melanesian Islands Discovery voyage through the South Pacific, between Auckland, New Zealand and Rabaul, Papua New Guinea. This meandering cruise will include the Bay of Islands before heading for a 2 day stay at historic Norfolk Island.

Other expedition highlights include the picturesque Isles of Pines, Anatom - in the middle of no where - and the cargo cult island of Tanna with its still-active Mt Yasur volcano. Capturing the romance of Melanesia, Orion will also visit Malakula, Nggella (Florida Islands) and Marovo Lagoon before arriving in the flooded volcanic caldera of Simpson Harbour, Rabaul.

Or slip away for an early summer holiday in November 2009 and join Orion's one-off 6 night Great Barrier Reef voyage that includes Hardy Reef, Hayman Island and Percy Island; then enjoy a few leisurely days at sea before disembarking in Newcastle.

Further information on Orion Expedition Cruises 2009 – 2010 Calendar of Sailings can be obtained by visiting the website www.orioncruises.com.au
Posted by rodeime at 12:33 AM 1 comment: