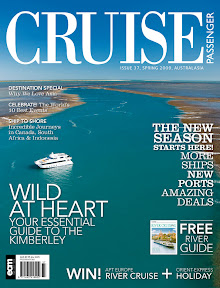 Why has European river cruising more than doubled in popularity for Australians in a year when we’re supposed to be broke? Where are the best river cruises in Europe, Asia, Russia, America and Africa? What do you need to know if you’ve never been on a river cruise before?

Cruise Passenger magazine’s annual River Cruising Guide, free with the spring issue on sale now, has all the answers.

Cruise Passenger is Australasia’s leading cruise publication, dedicated to providing its discerning readership with news, reviews and in-depth features about ships and destinations by the best travel and cruise writers in the business.

Must-read features in the spring edition of Cruise Passenger include: 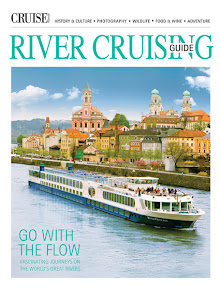 In this issue, readers can also win these great prizes:

The ‘bible’ of cruising is available at selected newsagents and by subscription for an amazing $29.95 a year for 4 issues, including the annual River Cruising Guide and Adventure Cruise Guide – call 1300 668 905 for details.

Posted by rodeime at 2:09 AM No comments:

During 2010 the luxurious expedition cruise ship Orion explores the Kimberley coastline with a series of 10 night expeditions departing May, June, July and September.

Create your own dreamtime stories when you join Orion's specialist Expedition Team in the Kimberley to view pre-history aboriginal rock art, land on remote islands and beaches and explore gorges, inlets and serpentine waterways or climb to the plateau next to the highest waterfall in the Kimberley, King George Falls.

Conveniently embarking and disembarking in Darwin or Broome, Orion's 10-night voyages combine the contrasts of exploring the ancient and magnificent Kimberley wilderness, incredible at-sea experiences and the historic pearling town of Broome with its cafes and art galleries.

Orion's guests will see art galleries of another sort at Vansittart Bay - Gwion Gwion (Bradshaw) Aboriginal rock art depicting highly adorned and decorated figures. Believed to be as much as 50,000 years old, these paintings, possibly the oldest known to man, record times when humans first explored this ancient continent.

At Raft Point and Bigge Island, Orion's Expedition Team will take guests to see aboriginal art including the mythical Wandjina tribe on a 'Great Fish Chase' featuring images of the Wandjina spirits with their distinctive halos and dugong, crocodiles, fish and snakes.

Crocodiles love the Hunter River and it is no wonder, flanked with lush green mangroves and soaring ochre cliffs - arguably one of the most scenic parts of the Kimberley coast - Orion's guests too will wonder at this extraordinary environment as they venture into the labyrinth of waterways in search of saltwater crocodiles to photograph.

An amazing event unfolds at Montgomery Reef. Arriving at high tide, in waters rich in marine life (including whales, dolphins, dugong, turtles, manta rays and black-tipped reef shark), there is very little to distinguish Montgomery Reef. However, as the 10 metre tide changes it drops faster than the waters trapped inside the reef can escape and a raging torrent of water cascades over the top as kilometres of reef emerge from the ocean.

Prepare to get wet as Orion's Zodiacs will take intrepid guests into a channel in the reef as water cascades down either side.

At Talbot Bay, Orion's guests will experience another mighty Kimberley feature - the Horizontal Falls, a by-product of the incredible 10 metres high tidal movements the region experiences. The falls are created when water, trapped on the inland side of gaps in the coastline cannot escape fast enough on a falling tide, rushes out through the narrow gap to the ocean side.

The 12km journey up the King George River, either by helicopter or Zodiac, reveals some of the world's most spectacular scenery including vertical canyon walls and the highest single-drop waterfalls in the whole of the Kimberley. Who will resist the optional flight-seeing excursion offering a wonderful view of the falls, as well as the rugged, complex system of gorges behind?

Voyage early in the season, following the annual 'Big Wet', to see the waterfalls at their most magnificent; while late July and August is the prime time to see migrating whales in the Kimberley. And what better way to see the largest Humpback whale population in the world as they head north from the Antarctic to rest and calve than from onboard Orion?

With fishing, scuba diving, hot air ballooning and camel safari's to try out there is plenty to do when Orion visits Broome. Inherited from its early pearling days, its colourful history and cosmopolitan feel is still evident. Guests can relax, enjoy the pristine white sand and swim in the clear waters of Cable Beach, wander Chinatown or visit Gantheaume Point, home of 130 million year old dinosaur footprints.

These voyages exemplify expedition cruising with Orion. Adventure, excitement and dramatic sea and landscapes combine with outstanding levels of service and comfort on-board to stimulate the mind and capture the spirits.

Orion's Kimberley season runs from May to September, offering guests a range of twelve 10 night cruise itineraries between the tropical city of Darwin and historic pearling town of Broome (and vice versa).

With 75 crew and a maximum of just 106 passengers Orion offers the highest staff to guest ratio and guest to public space ratio of any ship based in Australian waters.

Further information on all Orion 2010 Expedition Cruises to Antarctica, Papua New Guinea, Melanesia, New Zealand, the Kimberley and Arnhem Land can be obtained by visiting the website www.orionexpeditions.com

Scheduled prices range from $5000 to $6300 a person (depending on cabin), which includes local flights, cruising and guided excursions, all meals and transfers.

Four departures are in March, seven in September and one in October next year. They fit neatly into Kimberley Quest’s 2009 seven and 14-day cruises which Pearl Sea Coastal Cruises has been operating for 14 years.

Waterholes, monsoonal rainforests, fishing and art sites as well as cruising by the region’s magnificent cliffs, inlets and islands are still presented in this five-day package.

The air-conditioned Kimberley Quest II accommodates just 18 passengers in deluxe twin, deluxe double, superior double cabins and an exclusive flybridge double cabin, all equipped with private ensuites. Onboard features include a spa bath on the forward deck, inside dining and bar and casual rear deck.

Posted by rodeime at 9:59 PM No comments: