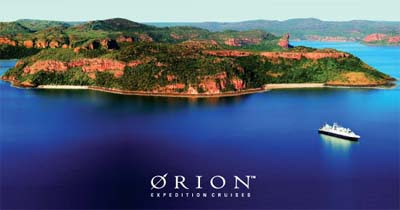 Book now, save up to 15% and receive a bonus helicopter flight

Fares begin from $8,190 (including savings) per person twin share for an ocean view Category B Stateroom.

There is no better way to experience the Kimberley in 2011 than onboard Orion - the only expedition cruise ship to hold internationally-recognised EarthCheck EC3 marine tourism accreditation acknowledging world-leading sustainable and environmentally sound operating practices.

Orion Expedition Cruises' environmental responsibility is recognised both domestically and internationally, including an Honorable Mention, Education, in the 4th Annual Conde Nast Traveler Save the World Awards.

Orion's passion for expedition cruising invariably exceeds expectation, providing important differences no other cruise operator in the Kimberley can offer. Combine a relaxed onboard ambiance, the highest staff to guest ratio of any ship based in Australian waters, and unmatched facilities and services (including spa, hairdresser, elevator and gym) on a ship of international standards and you will discover it's not just what we do, it's the way we do it that sets the benchmark for expedition cruising in Australia and Asia.

Further information on Orion Expedition Cruises can be obtained by visiting the website www.orionexpeditions.com

For reservations or to obtain a brochure call Orion Expedition Cruises: 61-2 9033 8777 (Sydney callers) 1300 361 012 (regional and interstate) or your travel agent. Email: info@orionexpeditions.com

Posted by rodeime at 1:32 AM No comments:

Qantas announced it will commence direct Brisbane-Broome services next year (2011), resulting in Broome becoming the third destination behind Perth and Karratha that Queensland passengers can fly to direct from Brisbane. The new services will be seasonal, operating from April-October, to coincide with the Broome dry season.

This new service will join Broome-Melbourne and Broome-Sydney services, resulting in passengers from the popular tourist destination being able to fly direct from Broome to three east-coast destinations, as well as Perth.

Posted by rodeime at 4:20 AM No comments:

Coral Princess Cruises is offering an Early Bird Special of 15 per cent off selected departures of its just-released 2011 Kimberley cruise programme. The 10-night exploratory cruise along the wild and beautiful Kimberley coast of Western Australia – much of it only accessible by sea – is Coral Princess Cruises' most popular voyage.
In the new 2011 Kimberley & Across the Top brochure, Coral Princess is offering 36 departures, cruising between Darwin and Broome. For bookings on voyages departing between April 8 and May 6, 2011, a 15 per cent discount off the cruise-only cost applies to all cabin categories. These departures coincide with the early stages of the Top End dry season, when the many waterfalls that plummet directly into the sea or into dramatic gorges are at their most spectacular.
The Kimberley wilderness of Western Australia is three times larger than England with a population of just 30 000. Coral Princess's 10-night voyages cruise through one of the planet's oldest and most awe-inspiring sea and landscapes. Rivers carve their way through ancient, eroded mountains that were once the height of the Himalaya, dropping in champagne waterfalls such as the 80-metre King George Falls. Excursions ashore visit rock art galleries where Bradshaw (Gwion) paintings - the world's oldest known art - record a human history stretching back 50,000 years.
"It's a diverse and vast landscape that takes time to explore," explained Tony Briggs, Founder and Managing Director of Coral Princess. "The advantage of a Coral Princess cruise is that our ships are Australian-owned and flagged. This enables us to spend up to 30 per cent more time exploring the Kimberley during a 10-night cruise than the foreign-flagged vessels that must, by law, include an international port in an itinerary of the same length."
Having the extra time means that shore excursions are more frequent and more leisurely. On the Coral Princess cruise, there is an optional helicopter flight over the Mitchell Plateau for views of the impressive four-tiered Mitchell Falls, and bushwalks to idyllic swimming holes. The cruise explores the 800-odd islands of the Buccaneer Archipelago, including an exhilarating Zodiac ride through the Horizontal Waterfalls, where the largest tides in the southern hemisphere force their way between rocky cliffs in a formidable display of the forces of nature.
Coral Princess – which pioneered small-ship cruising in the Kimberley 15 years ago, offers guests a choice of two purpose-built vessels: the 48-passenger Coral Princess or the luxurious 72-passenger Oceanic Discoverer.
"Our all-Australian crew and team of guest lecturers delivers an unmatched level of experience, knowledge and service that has seen our clients returning year after year," said Briggs.
Earlybird prices for the 10-night Kimberley cruise start at $5,908 per person, twin share, aboard the Coral Princess and $7,183 aboard Oceanic Discoverer, including all meals, lectures and services of expedition staff on board, excursions and group transfers. There are regular departures from both Darwin and Broome between April and October 2011.
The 15 per cent discount applies to all new bookings on departures between April 8 and May 6. The offer is for the cruise only, and is available until November 30 or until sold out.
At the beginning and end of the season, the Kimberley cruise can be combined with an 11-night voyage, Across The Top of Australia, between Cairns and Darwin, exploring the remote reaches of the Great Barrier Reef, Cape York, Torres Strait, Arnhem Land and the Cobourg Peninsula – visiting places of exquisite beauty and cultural significance so remote that they can't be reached any other way. Departing in March, April and October, prices for this 11-night cruise start at $6950 per person. There is a 10 per cent discount when booking the two cruises together.
For further information and reservations contact Coral Princess Cruises on 1800 079 545 or visit http://www.coralprincess.com.au/.
Posted by rodeime at 12:25 AM No comments: