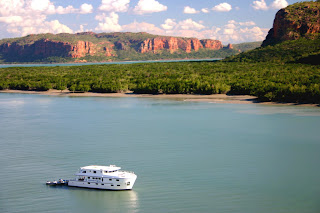 Cruising the coast of the heritage-listed Kimberley

Releasing the 2012 itineraries for Kimberley Quest this week, Pearl Sea Coastal Cruises also announced 20 per cent discount earlybird deals for new bookings made between September 1 and January 31, on 8, 10 and 14-day cruises in 2012.

Director, Lynne Ralston said that in recent years Kimberley Quest II skippers had discovered several secret spots that could be easily accessed by the stylish 18-passenger Kimberley Quest for a 10-day Broome-Broome trip.

"We can explore many untouched places that we rarely have the opportunity to visit," she said. "While we have been operating cruises along the coast for 18 years we're still learning her secrets."

The price includes cabin with ensuite, all chef-prepared meals served on the shady stern deck or in the air-conditioned lounge, full use of the vessel (that includes the spa pool on the forward deck) and guided land and water excursions.

Departures are August 21 and August 30.

Twenty-five departures -- listed as "expeditions" by PSCC -- across six itineraries are scheduled for 2012 in a season running from March 27 to October 8.

Two of three eight-day fishing expeditions are booked out.